Hello my kitty friends.  So what is your favorite toy that your human minions give you..a balled up piece of paper or foil.  a stuffed toy filled with catnip or is it that no-no toy of a rubber band, hair tie or hairband?

I’m here to tell you, don’t play with those hair ties, hairbands and rubber bands.  Those bands are so much fun to play with and for some reason we think they should be eaten once we play with them.  Some of us hoard them under the couch or refrigerator but many of us do the unspeakable and we eat them.  We just lay back and stretch when our humans wonder where in the world did my hairband go and just open up a new bags of toys..I mean hairbands.

Let me tell you about Pepper.  Pepper’s pet parents brought him in last week as Pepper hadn’t been feeling well for a few days.  Vomiting after he ate..eww…and just all around feeling yucky.  When Dr Bahns found out Pepper’s history of playing with hairbands she took an xray.  Low and behold!!!  He had what Dr Bahns and his owners thought were several hair ties in his tummy.  Pepper needed surgery to remove these hairties as they were making it impossible for Pepper to pass any food into his intestines.

Pepper did great and is now one happy kitty.

We here at Animal MD Veterinary Clinic want to make sure our pet parents recognize when it’s time to bring their furry family members in for an exam.  Vomiting really isn’t “normal” for any of us.  Sometimes it’s from hairballs or eating too fast but many times there can be something very serious wrong as in Pepper’s case.  If Pepper’s pet parents hadn’t acted so quickly, Pepper could have died. 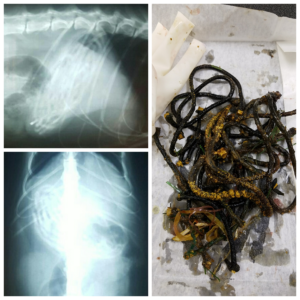